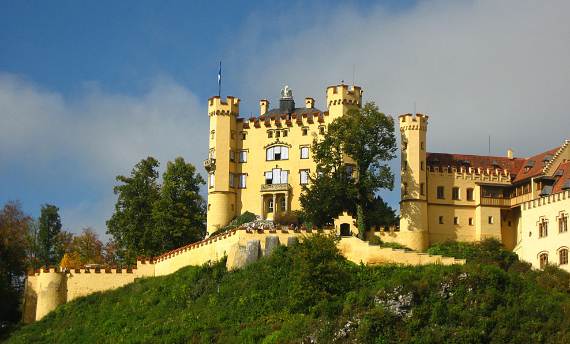 Not all tourists love to visit castles, probably because that they may fear them or it is a boring tour but in my opinion visiting amazing old castles is a way approaching to a history that has been left as a lasting mark on the landscape in shape of a castle. Many castles are beautifully to go through experience with their formal gardens were you can get lost in and historic battlefields are awaiting your visit to relive their glory.
Germany is the land of fairy tales that gave the world as it is home to the most magical castle on the planet and Hohenschwangau castle is one of those who have a very impressive character. Schloss Hohenschwangau (Hohenschwangau Castle) is one of the four famous castles attributed to ‘Mad’ King Ludwig II of Bavaria, Germany. King Ludwig II’s castles are- some of Germany’s best attractions- : stocky Hohenschwangau, his boyhood home; the nearby and fanciful Neuschwanstein, his dream escape; Herrenchiemsee where Ludwig lived there for only 10 days in October 1885, Falkenstein, a planned, but never executed and Linderhof, his final retreat. Hohenschwangau is the smallest of Ludwig’s four creations and is lesser known than Neuschwanstein castle. It has a much more “lived in” feel due to the lesser chaotic atmosphere and has much more historic nature as well which sets it apart from the other three palaces – which are a little colder and more formal. Hohenschwangau castle is very close to the world’s most famous castle Neuschwanstein castle both are located in southern Germany on the Western side of Hohenschwangau Village and worth a visit. 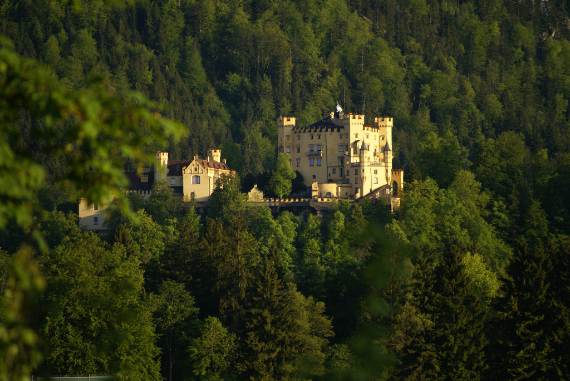 Here are some images that are absolutely beautiful, you almost feel like you are actually there! Many thanks to airpano.com

Hohenschwangau Castle had long been the residence of the rulers of the area and was used by King Ludwig II’s parents (King Maximilian II of Bavaria), it was his childhood residence. It sets at the top against the dramatic backdrop view over the mountains of the looming Alps were breathtaking views of Neuschwanstein on the Eastern side of the village… As you can see the present-day Hohenschwangau castle isn’t exactly a medieval structure. Most of what you can see was converted into a jewel of German romanticism in the 1830s in the “Gothic style” by King Maximilian (Ludwig II’s father) on the remains of the fortress Schwangau Bavaria’s oldest castle which was dated to the 12th Century. This custard-yellow castle is very impressive and even if you don’t go in, the horse and cart ride enjoyed a lovely carriage ride to the castle to get there is worth the trip alone. Have a beautiful day with all that scenery around the Hohenschwangau castle it really worth the many pictures you can take.
Schloss Hohenschwangau is just one of the four famous castles attributed to ‘Mad’ King Ludwig II of Bavaria, Germany and there’s much more to discover the world-famous creation; – Neuschwanstein, Herrenchiemsee, Falkenstein and Linderhof. Schloss Hohenschwangau can be visited on its own only possible as part of a guided tour or as part of a combined visit (and ticket) with Neuschwanstein. Have a really wonderful day in conjunction with Neuschwanstein castle.There’s much more to explore . . . HOHENSCHWANGAU is included in their 15 days castle tour. Visit their site for more details:www.castlesoftheworld.com 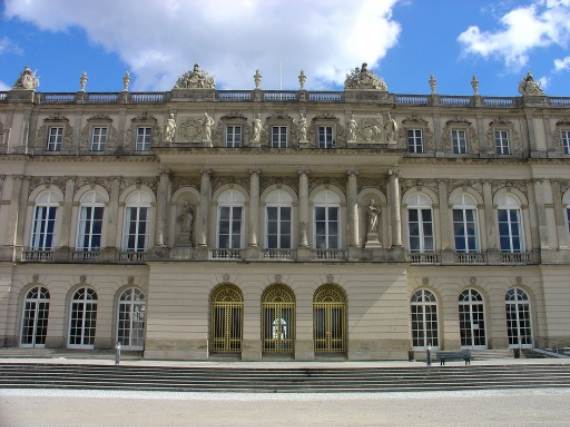 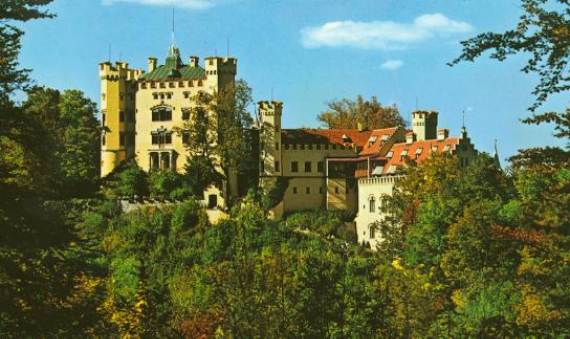 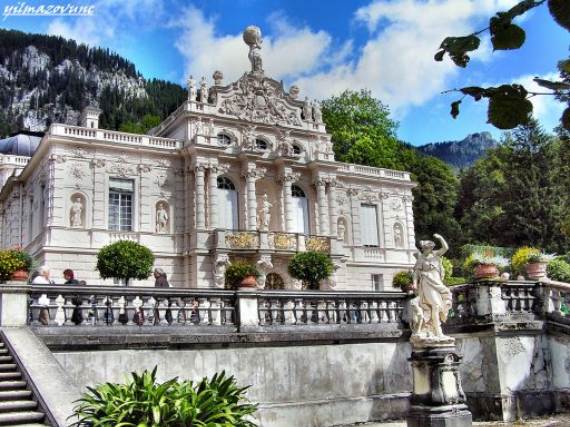 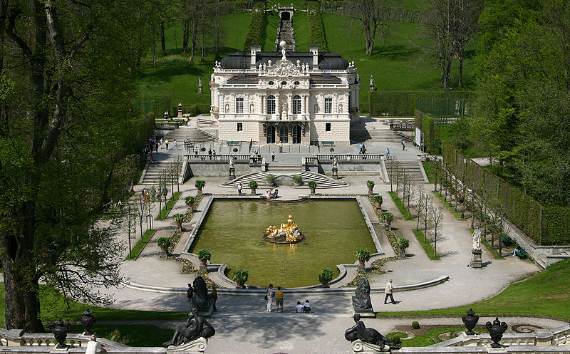 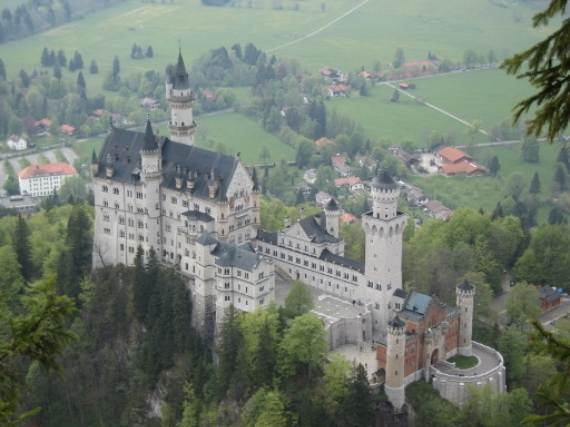 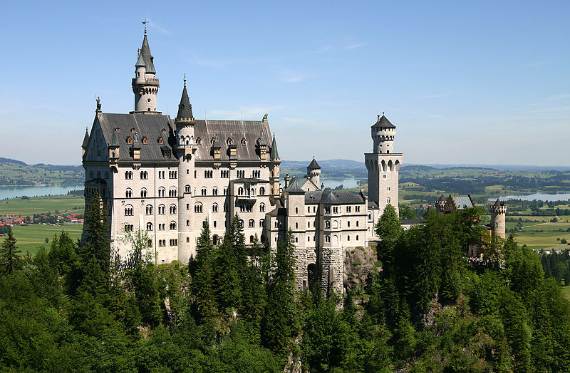 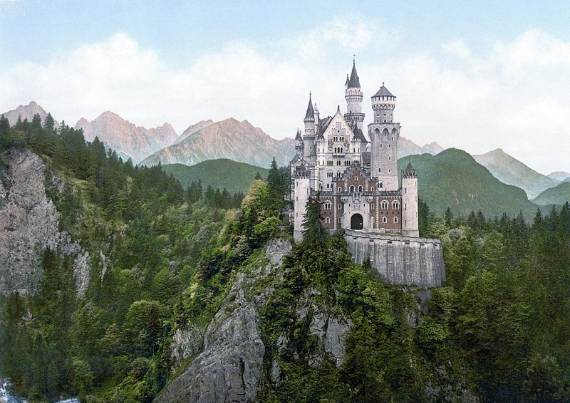 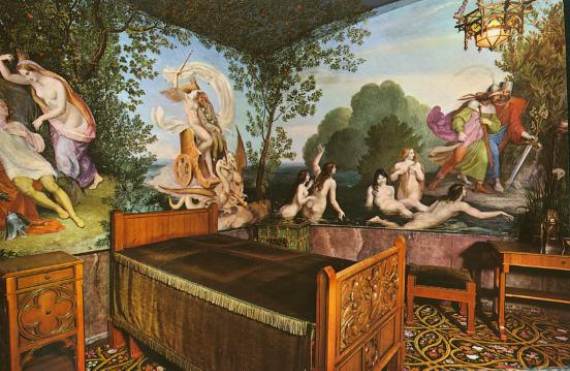 The Tasso Room.- The royal bedroom

The Living Room of the Queen 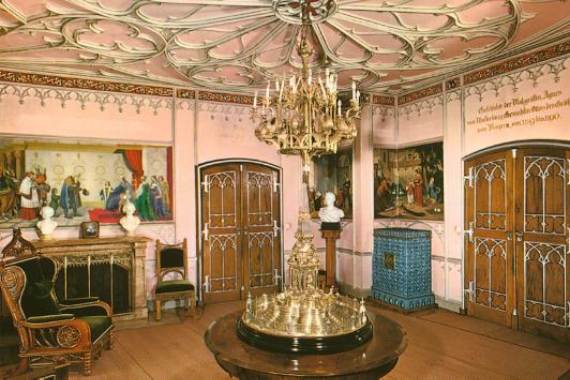 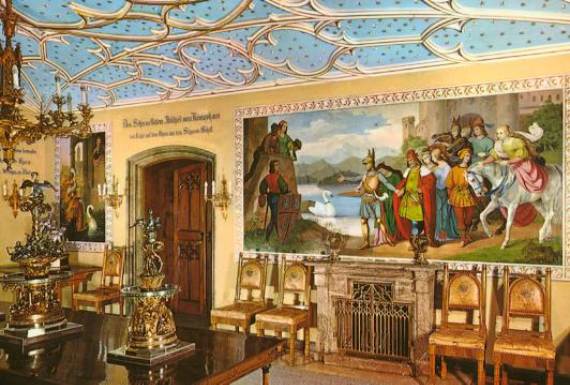 The Hall of the Swan-Knight 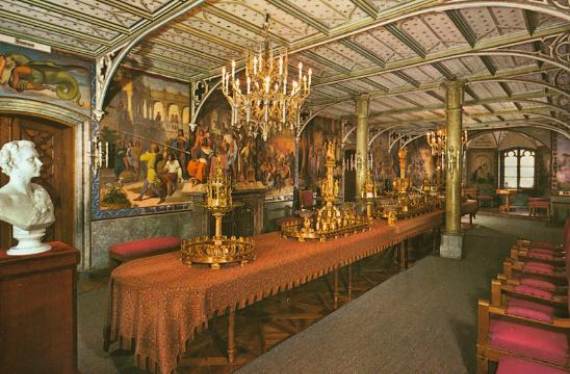 The Hall of Heroes 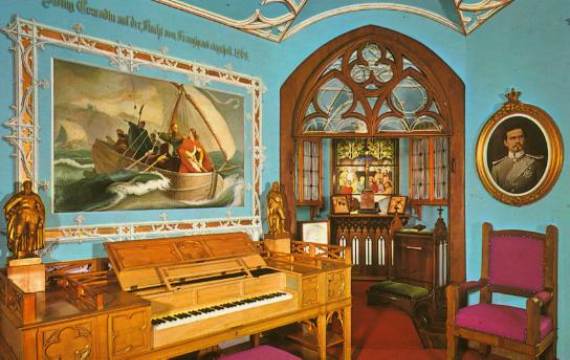 The Dressing and music room of the King 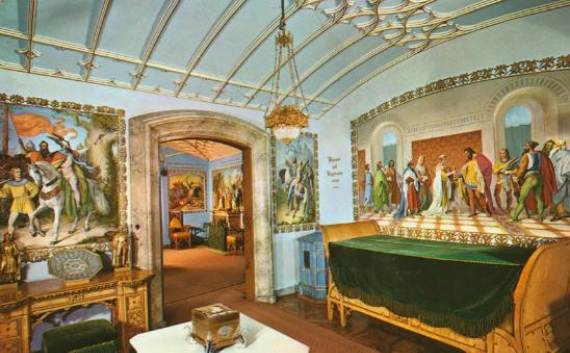 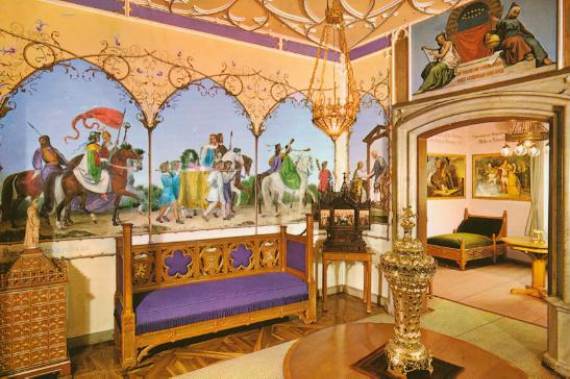 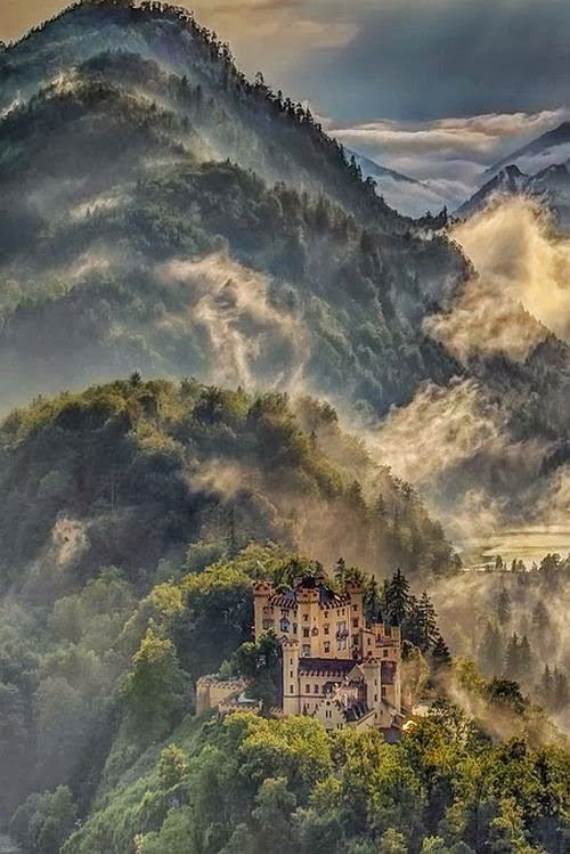 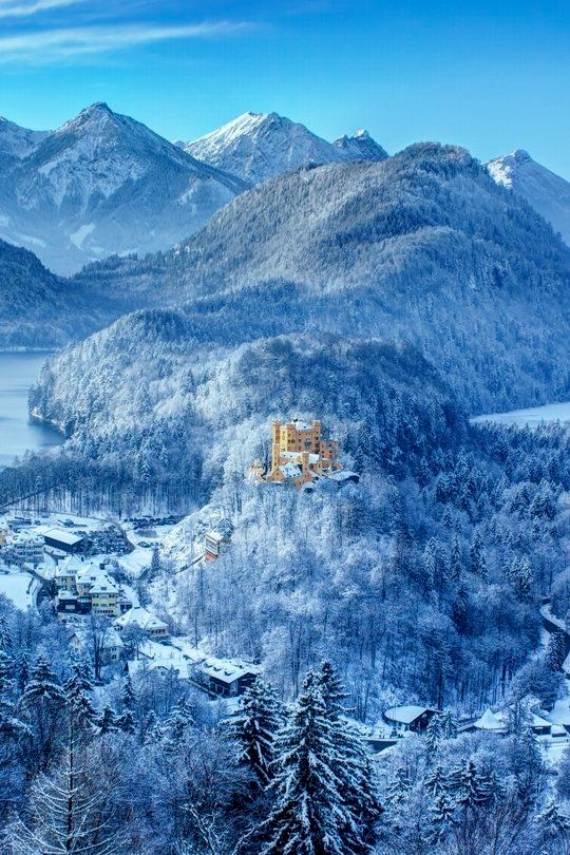 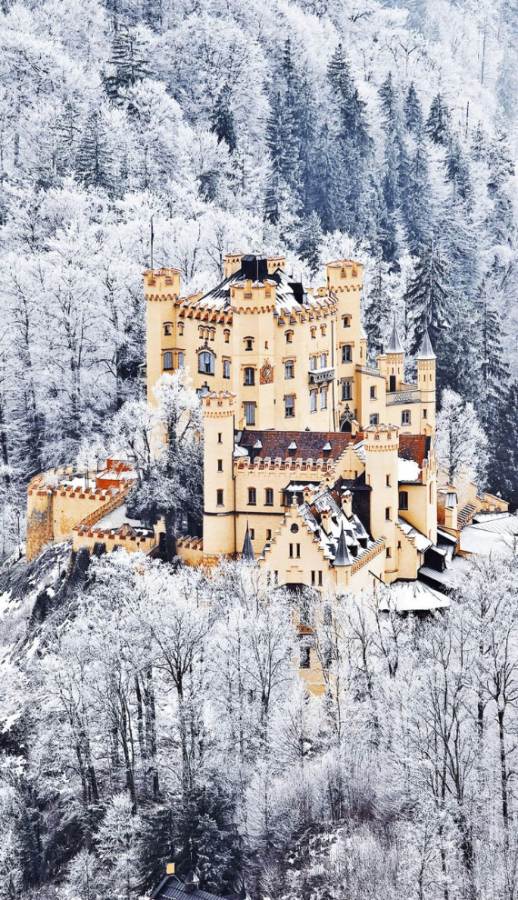 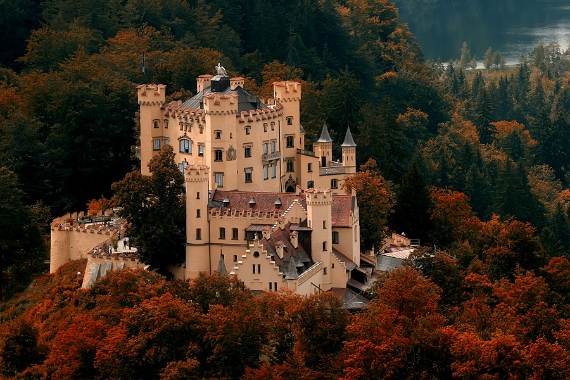 Creative Romantic Ideas for Easter Decoration For A Cozy Home

Light Up Your Home with Fabulous Decoration Items for Diwali