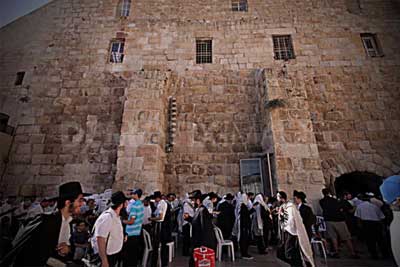 Tisha B’Av, also known as “The Ninth of Av,” is a fast day that marks the culmination of a three-week period mourning of the two Temples, the First by the Babylonion king, Nebuchadnezzar in 586 BCE, and the Second Temple by the Roman general Vespasian in 70 CE in Jerusalem.
It falls on the ninth day of the Hebrew month of Av, is the second most severe fast day of the Jewish calendar (behind Yom Kippur). Tisha B’Av, is the saddest day in the Jewish calendar. It has also became a day of general mourning for other major disasters that have befallen the Jewish people, from the Edict of Expulsion from England in 1290 to the mass deportation of Jews from the Warsaw Ghetto.
Tisha B’Av usually coincides with late July or mid-August on the secular calendar.
The period begins with another fast day, the 17th of Tammuz, when the second Temple walls of Jerusalem were breached in 70 CE.
Like the 17th of Tammuz, Tisha B’Av is traditionally a fast day, it is customary to not eat meat (except for Shabbat) and joy decreases. Restaurants and theaters are closed in modern day Israel on Tisha B’Av. Weddings also are traditionally not performed during the period between 17th of Tammuz and the 9th of Av. Within all this sadness and tragedies throughout the generations, there is an element of hope.

Excavated stones from the Western Wall of the Temple Mount (Jerusalem), knocked onto the street below by Roman battering rams in 70 CE