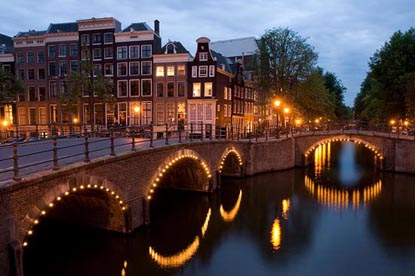 Is the capital and largest city of the Netherlands, Holland. Settled as a small fishing village in the late 12th century, Amsterdam became one of the most important ports in the world . Amsterdam has always been an attractive destination. Amsterdam is one of the greatest small cities in the world, hosting dozens of world-class museums, historical sights, miles of beautiful canals, well-maintained parks,and narrow cobblestone streets .Amsterdam is one of the most romantic and beautiful cities in Europe. Amsterdam has a broad spectrum of recreational and cultural sights that range from fascinating old buildings, and museums which are the main tourist attraction in Amsterdam eg. Rijksmuseum, Van Gogh Museum and Stedelijk Museum,there are over fifty museums which attract millions of visitors each year and are of an essential part of the Amsterdam experience. 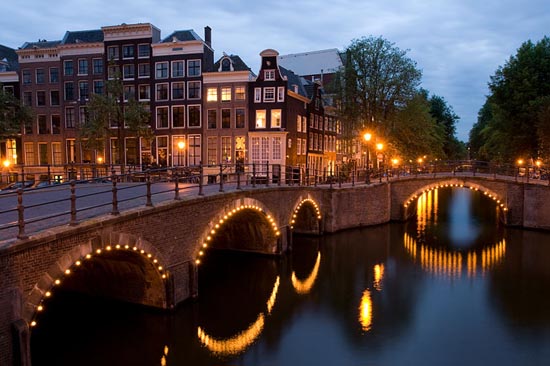 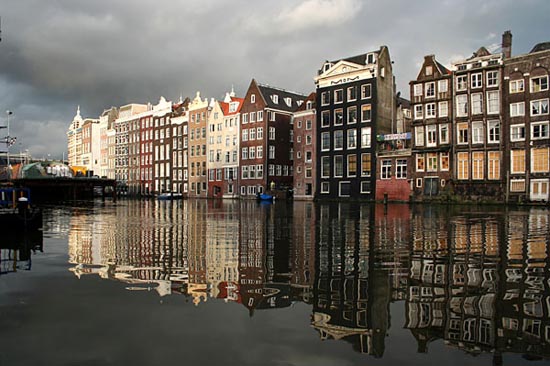 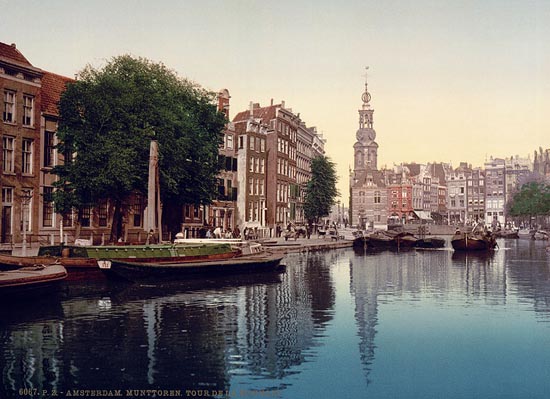 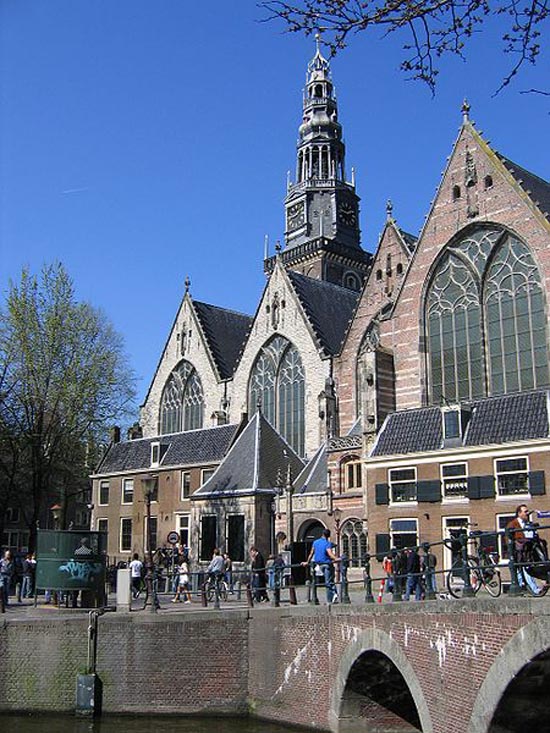 Oude Kerk :
The origins of the Oude Kerk (Old Church) date from early 13th century . The oldest church in Amsterdam, located on Dam Square, next to the Royal Palace. Its buildings, especially the Gothic-renaissance style octagonal bell tower, was used by sailors to get their bearings,is now a center of cultural activities. 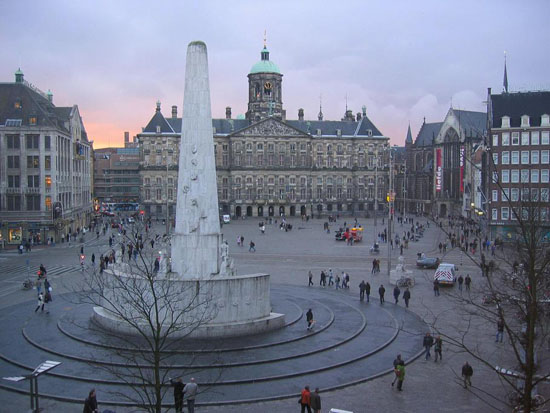 Dam square:
Dam square is equivalent of Piccadilly Circus in London or Time Square in New York.
The Dam Square lies in the historical center of Amsterdam, and is a heart of Amsterdam. 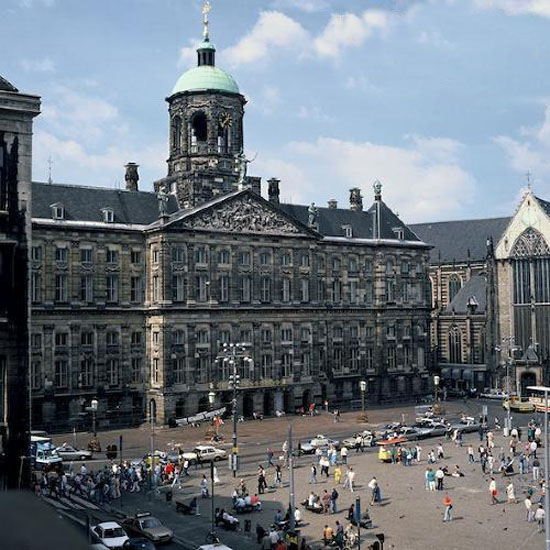 Was created in the 13th century when a dam was built around the river Amstel to prevent the Zuiderzee sea from swarming the city. 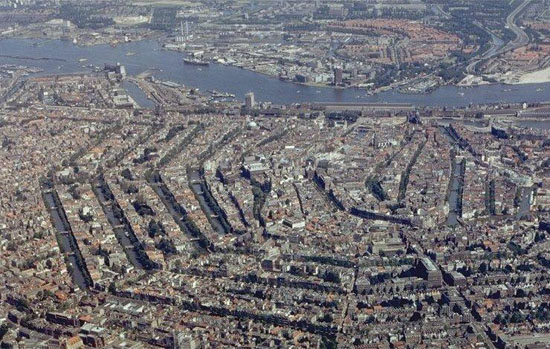 Amsterdam’s canals:
There are more than one hundred kilometres of canals, have led Amsterdam to become known as “The Venice of the North”. 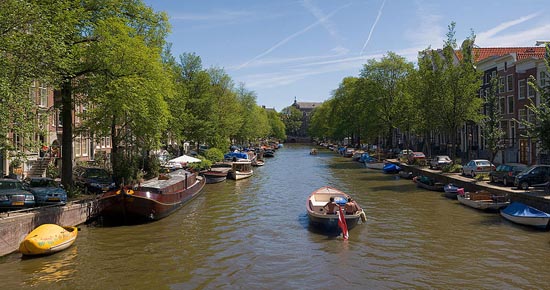 The Amsterdam canal system is the successful outcome of city planning,in the early part of the 17th century. Most of the current canals were built during the 17th century, Amsterdam’s golden age.
The canals are an easy way to travel around the city transporting by municipal canal-bus or locals operate tour boat businesses. 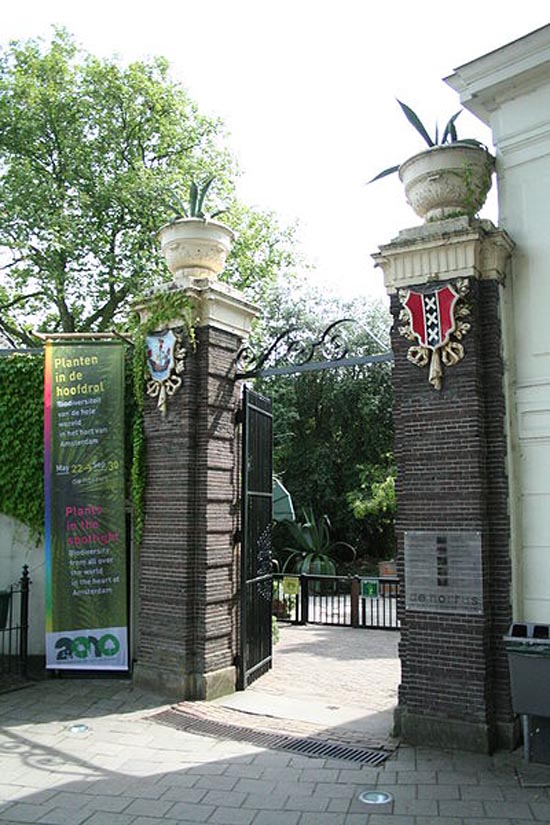 Hortus Botanicus – the Botanical Garden:
Amsterdam has a big and attractive botanical garden called Hortus Botanicus, one of the oldest in the world (1632),a three-hundred-year-old gates at the entrance. 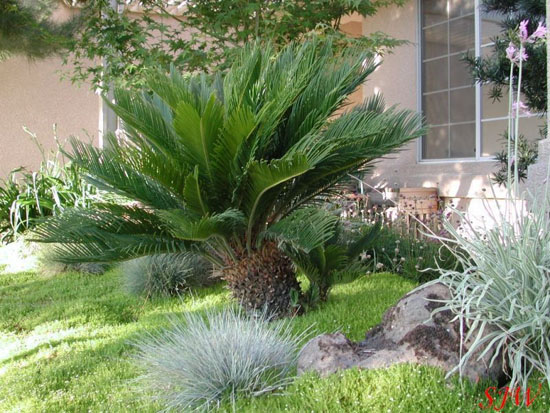 Famous for some of its trees and specialist plant collections, some of which are on the “danger” list.
The garden is home to cycas palms that are nearly as old as the Hortus itself. 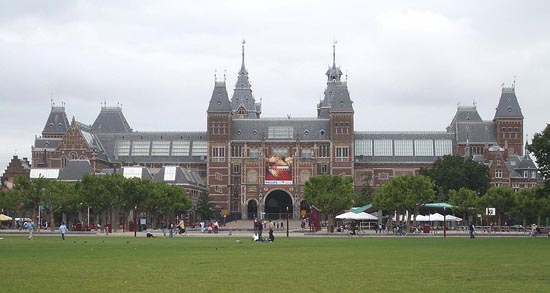 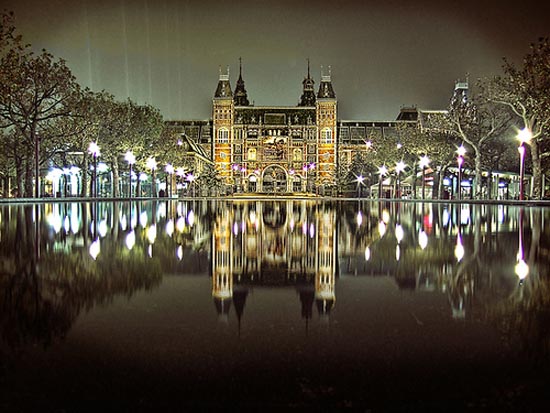 Rijksmuseum:
The Rijksmuseum is a Dutch national museum , the largest museum in the size of its collections, its building in the Netherlands. 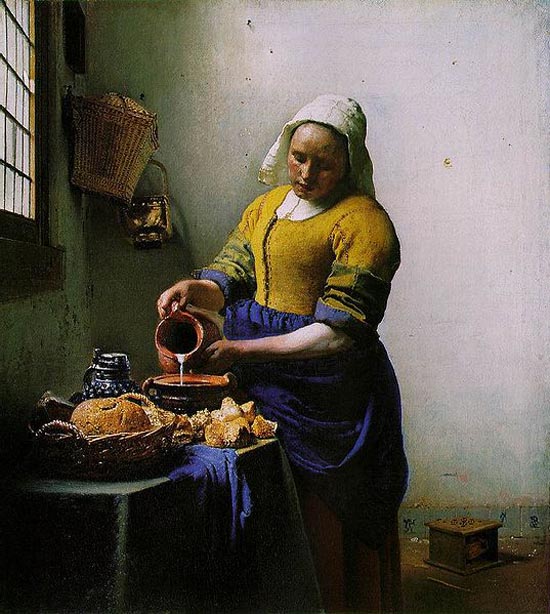 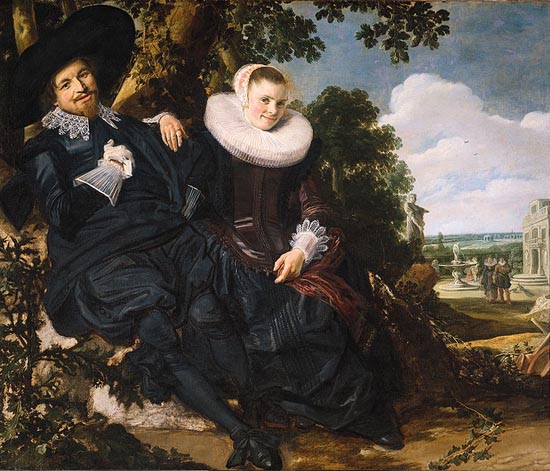 The museum is dedicated to arts, crafts, and history. It has a large collection of paintings from the Dutch Golden Age and a substantial collection of Asian art.
Was founded in 1800 in The Hague.In 1808 the museum moved to Amsterdam.

Van Gogh Museum:
This modern museum houses some 200 paintings and 550 sketches featuring the works of the Dutch painter Vincent van Goghin all his moods. 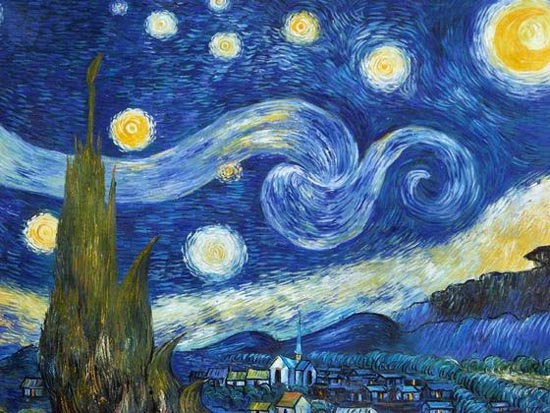 It has the largest collection of Van Gogh’s paintings and drawings in the world, combined with hundreds of letters by Van Gogh, and selected works by his friends and contemporaries, form the core of the museum’s collection, from the 19-th century . 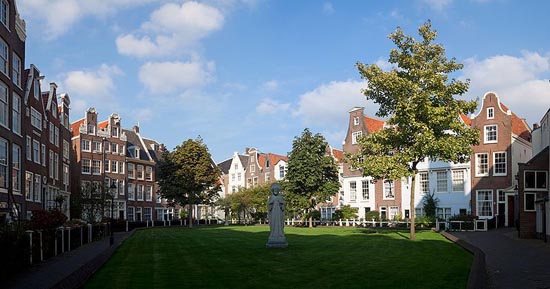 Begijnhof:
The Begijnhof consists of tiny houses grouped around a well-kept courtyard in the very center of the city which is one of the oldest inner courts ,was founded during the Middle Ages.
The devout celibate Béguine nuns have been replaced by old ladies (unmarried or widowed women who wished to live a pious life of service without becoming nuns), by a Catholic order.
The house at No 34; it dates from around 1465, being the oldest preserved wooden house in the country . 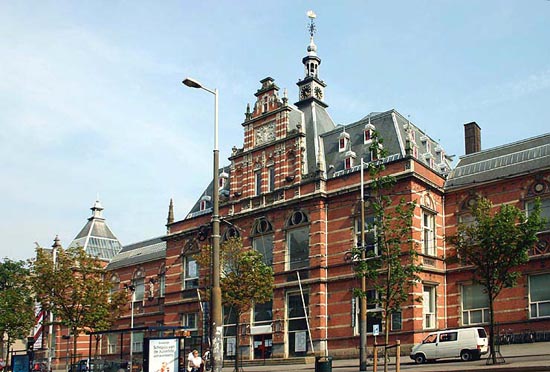 Stedelijk Museum:
Is the city’s museum for a world-class museum modern and contemporary art and design in the Netherlands in the heart of Amsterdam alongside the Van Gogh Museum and the Rijksmuseum ,established 1895. 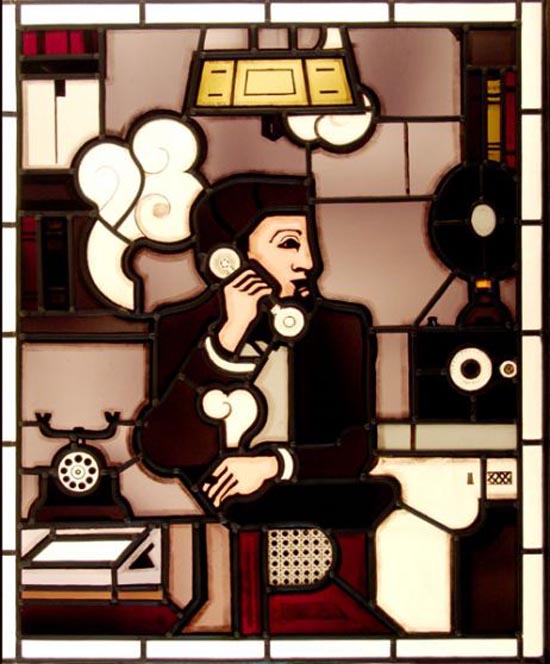 The Stedelijk Museum has one of the richest modern art collections of all biggest 20th C. artists in the world. 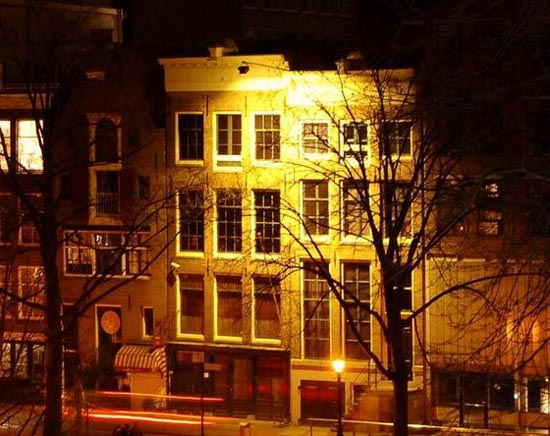 Anne Frank House:
Anne Frank House in the center of Amsterdam is the hiding place where Anne Frank wrote her famous diary during the World War II, hiding from Nazi persecution with her family and four other people in hidden rooms at the rear of the building for over two years. Anne Frank House became a museum dedicated to Jewish wartime . 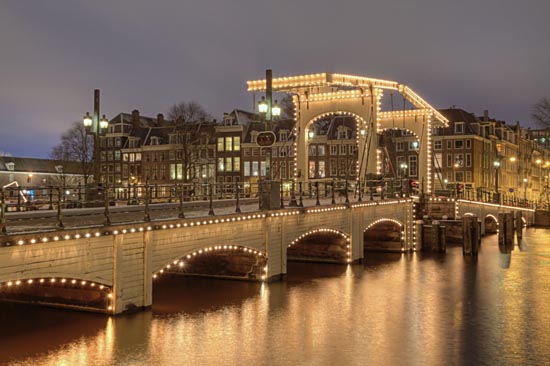 One of the most beautiful bridges of Amsterdam. Magere Brug is an Old Dutch design wooden bridge known as a double-swipe (balanced) bridge, connecting sides of river Amstel.
About every 20 minutes the bridge opens, as the bridge master lets boats through. 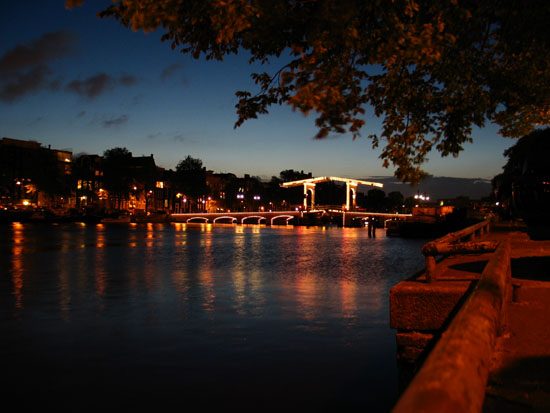 The present bridge was built in 1934. The original bridge was built at this site in 1670, but it did not change much since.
Tale-tellers talk of two wealthy sisters who lived on opposite banks and got the bridge constructed to visit each other. 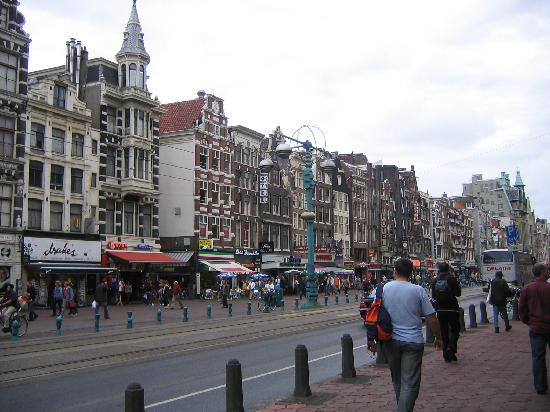 Amsterdam , the ” Venice of the North” , take a deep breath of fresh air and enjoy the magic of the city.