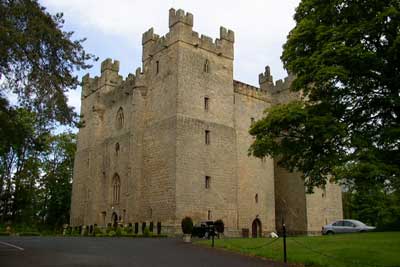 For a magical long history touch or for romantic break why not find the time to visit Langley castle Hotel. Set in its own ten-acre woodland this fabulous castle hotel dates back to 1350. Langley Castle Hotel is a fortified castle nestling in Northumberland, North-East England, enjoys the touch of medieval magic. It was converted from an existing manor house into a castle in 1350, during the reign of Edward III by Sir Thomas de Lucy as a great H-shaped tower of four storeys. Langley Castle was severely damaged in 1405 by fire by the King’s forces and shortly thereafter fell into ruins and remained in ruins until 1882when it was purchased by a local historian, Cadwallader Bates and made it his life’s work to restore the original 14th century structure .The result is the architectural gem that you can see today, without any of the later additions that so many other castles have.He died in 1902 and his wife Josephine continued the restoration until her own death in 1933. The building was abandoned until it was used as an army barracks in the Second World War following which it was used as St. Cuthbert’s girl’s school in1972. In the Eighties it was bought and renovated by the Robb family before being sold to the hotel company in 1985 who now own it and created a luxury castle hotel that can be enjoyed by guests today. The castle has retained its architectural integrity and is regarded as one of the few medieval fortified Castle Hotels in England. Throughout the past 650 years, the Castle has been home, together with its estate, to a wealth of Lords and Ladies whose names were frequently associated with the turbulent history of the Kingdom.

One of the more remarkable features of the Langley Castle is unusual large number of ‘garderobes’. The south west tower is occupied by no less than 12 garderobes, four to each floor each having a pointed arch to the recess, in which are stone corbels to carry the seats. A garderobe is section cut out from a tower that in medieval times was used as a toilet. Despite this humble purpose, today, these are perhaps the finest remaining architectural feature of this type and style of architecture in Europe .This is suggested that the building was intended from its inception to be well garrisoned and had been more than just a family residential purpose and indeed was designed to be heavily manned.

Langley Castle is no ordinary Castle Hotel… It is an experience and an inspiration ideal for weekend or romantic short castle breaks all year round. In total, Langley Castle has 27 large guest bedrooms. All rooms have got private facilities and are luxurious. Some have special features such as four-poster beds, stained glass windows and window seats into 7ft-thick castle wall, and spa bath. Modern day comforts are subtly blended into the historic architecture. Castle bedrooms are uniquely named, many after important figures from the castle’s past, including Cadwallader and Josephine. At night, relax in the hotel lounge in front of the roaring log fire or dine in style in the award-winning restaurant. During your stay, you can go hot -air ballooning or try your hand at archery. You can even have a picnic especially prepared for you by the hotel’s chefs. For more information visit booking.c0m.
Langley is perfect for discovering the delights of Bamburgh Castle, Holy Island and the Scottish Borders. The exclusive nature of the castle makes Langley the perfect destination to be pampered in unique surroundings that you will never forget your stay.

Understand the Coronavirus to defeat it in 8 minutes