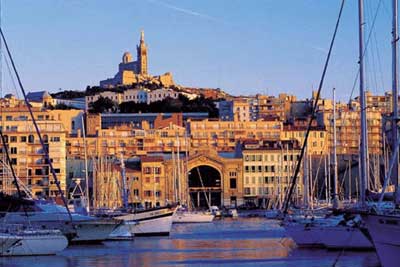 Symbol of Marseille and one of Marseille’s top tourist attractions; the Notre-Dame de la Garde Basilica occupies the highest point in the city as well as in the hearts of the inhabitants of the “Phoenician city”. Let’s visit this magic place.
19th-century Basilica of Notre-Dame-de-la-Garde (Basilique) is a pilgrimage church ( Romano-Byzantine basilica) known locally as the ” Good Mother that overlooks Marseille city, harbor, the mountains, the Mediterranean Sea and nearby islands.
This is one of the best choices to observe almost the entire cityscape of Marseille it can be seen from most places in the city and the harbor, towering above the city (530ft/162m above sea level), as it is on the highest hill in Marseille.
Notre-Dame de la Garde was erected in 1853 and was consecrated in 1864 by Napoléon III, and designed by The architect Jacques Henri Esperandieu from Nimes, who was only 23 years old when he got the commission – and he was a Protestant faith, though this is definitely a Catholic church. 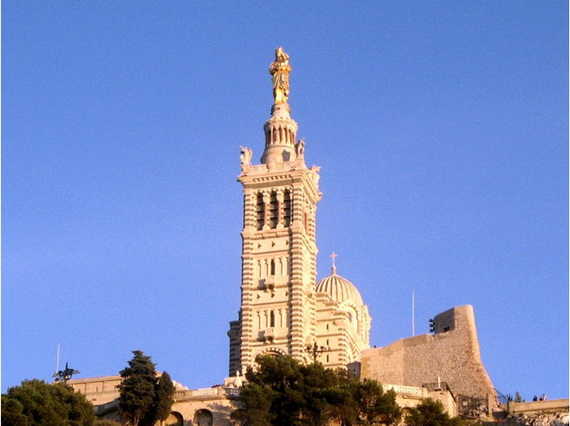 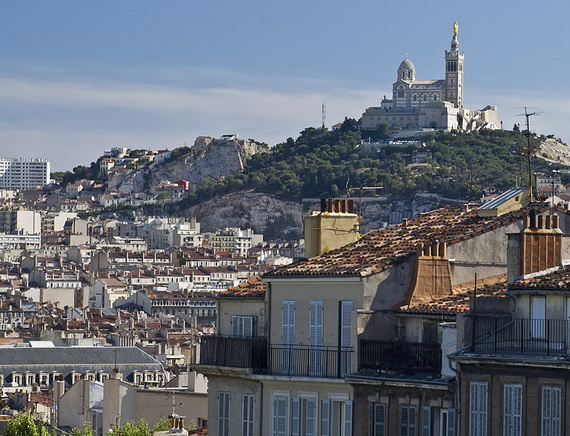 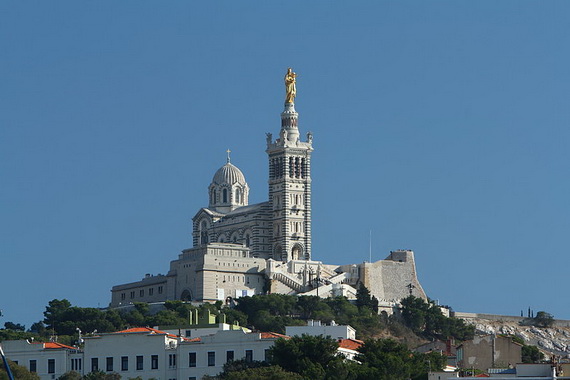 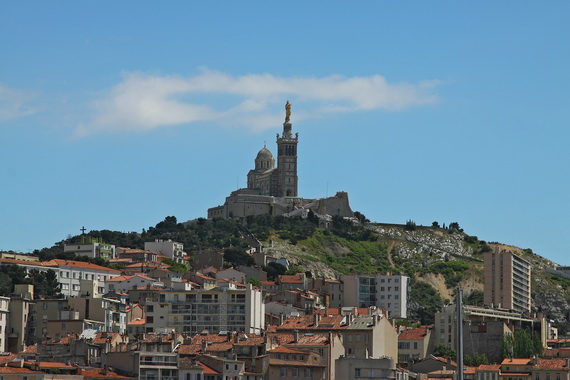 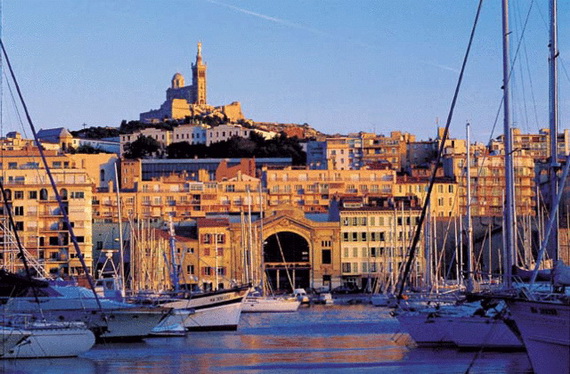 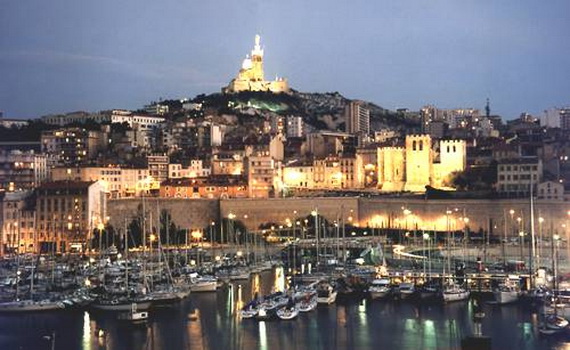 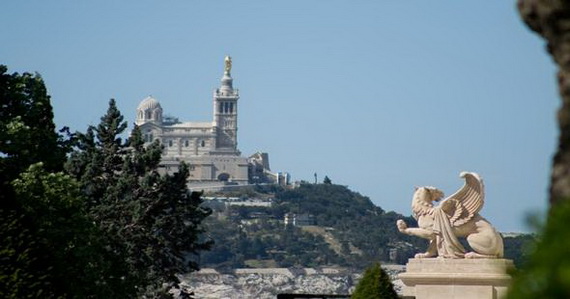 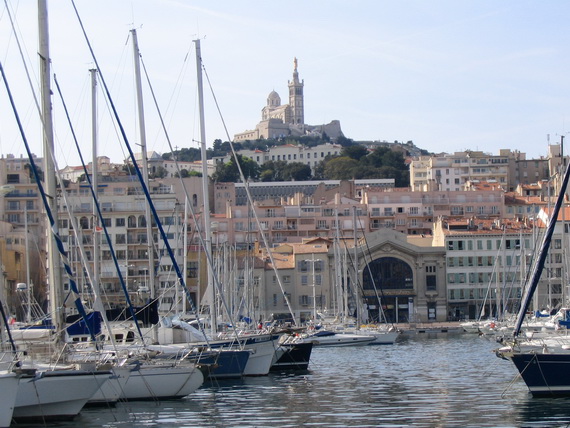 Although the construction of ‘la bonne mere,’ as Marseillais affectionately refer to her, began in the 19th century, It all began in 1214 when several churches have preceded its construction, a hermit master Pierre, received the authorization to build a small chapel on this site which belonged to the Abbey of Saint Victor.
Little did he know three centuries later, the site would acquire a major strategic role?
Notre-Dame de la Garde was built to defend against a potential invasion from the armies of Charles V of Spain, led by the Constable of Bourbon. King Francois 1st built a fortress in 1524 on the top of the hill which, together with the Châteay d’If, forms a maritime defense which serves as a foundation for the present basilica and find above the north porch the signature of the King l a salamander.
Le ‘Fort Notre-Dame de la Grace attracted an ever increasing flow of worshipers; the Garde hill has a triple function: look-out post, fortification and place of worship and pilgrimage. Sailors, in particular, ritually climbed up the hill to pray for a safe journey or drop ex-votos (a votive offering to a saint or divinity; an ongoing tradition).
From the 16th century, the popularity of the chapel grew and gradually transformed into a center of religious devotion of the sailors. The sanctuary was proved to be too small, to accommodate that increase growth of visitors; it was decided to build a basilica.
Notre-Dame de la Garde traditionally was thought by Marseille’s People as the guardian to protect the sailors that leave the harbor and the protector of the city, thus; sailors are supposed to drop a prayer to la bonne mère (“the good mother”) on leaving in order to increase their hope to come back and giving thanks for their unharmed return… Notre-Dame de la Garde is a friendly, colorful church ornamented with colored marble, it is considered by Marseille as the guardian and a protective aura over the city. 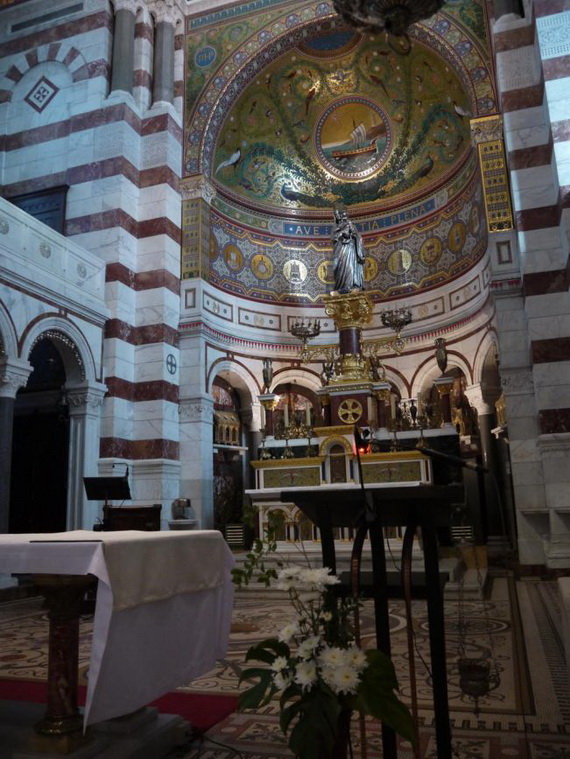 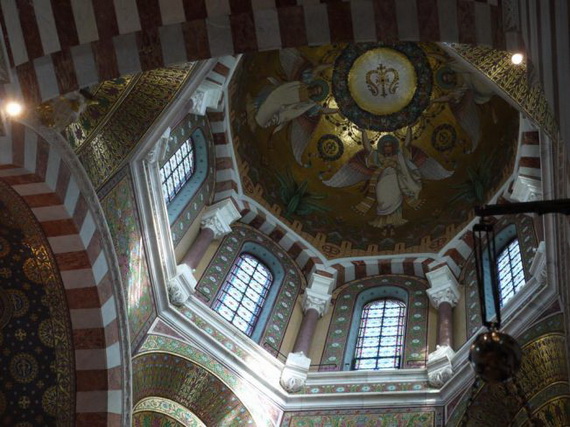 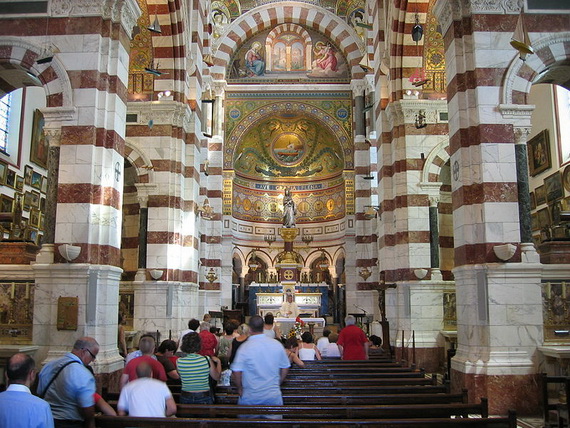 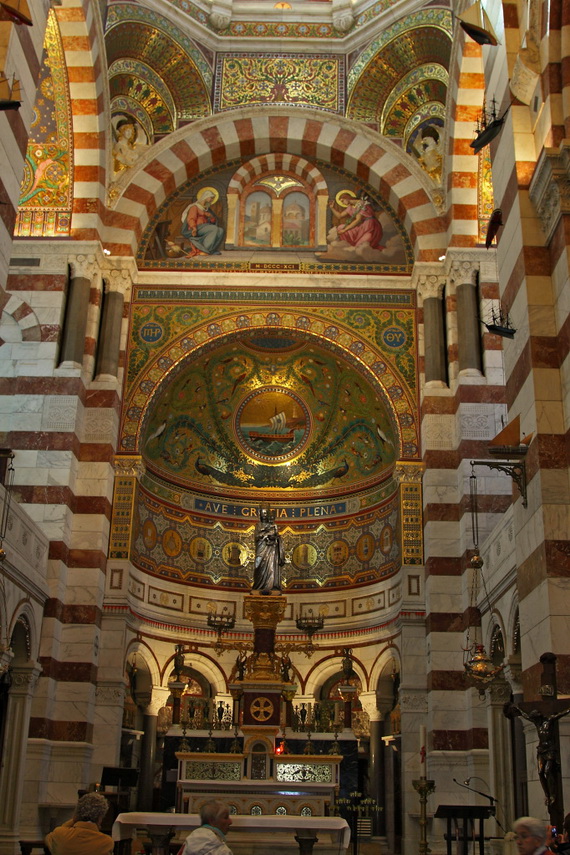 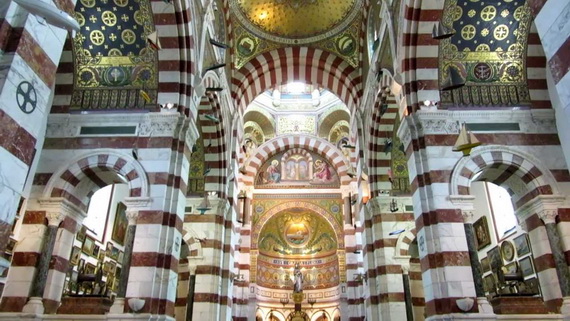 The edifice consists of two parts: a lower church, or a vaulted crypt on the lower level carved from the rock which houses in particular a multi-coloured crucifix dating from the 16th century church and a “mater dolorosa” of marble of Carpeaux ; and the sanctuary an upper church of Neo-Byzantine style on the upper level dedicated to the Virgin (name day and pilgrimage on 15 August) where the floor and ceiling mosaics are of gold background depicting olives, vines and exotic birds,, stained glass windows and muli-coloured marbles abound, giving it the appearance o a reliquary.
Of particular interest are the monumental bronze doors weighing close to 2,000 kilograms and the high altar designed by Revoil, Virgin in silver by Chanuel, an Annunciation low relief in multi-colored glazed earthenware, a Florentine work of the 16th cebtury
Interiorly the domed basilica is decorated with colored marble, intricate mosaics and murals. Many of the walls are covered with hundreds of ex-votos, including paintings, plaques, model boats, war medals and Its bell tower is crowned by a 30 ft (9.7m) tall gilded statue of the Virgin Mary on a 40 ft (12m) high pedestal.
Most stunning of all is the huge 9-metre / 30-foot high golden Virgin statue of the Madonna and Child at the top of the basilica’s bell tower visible across much of the city and from miles out at sea. The gilded statue was designed by sculptor Eugene Lequesne and executed by Ateliers Christophe in Paris. The bell itself is impressive, measuring 2.5 meters / 8 feet in height and weighing in at 8,324 kg on top of which the Virgin Mother stands gloriously.
It has served as a Part lighthouse, part fortress, part sacred place of pilgrimage, La Bonne Mere, telling the story of Marseille.
As well as being a major local landmark, Notre-Dame de la Garde is the site of a popular annual pilgrimage every August 15, the Feast of the Assumption. 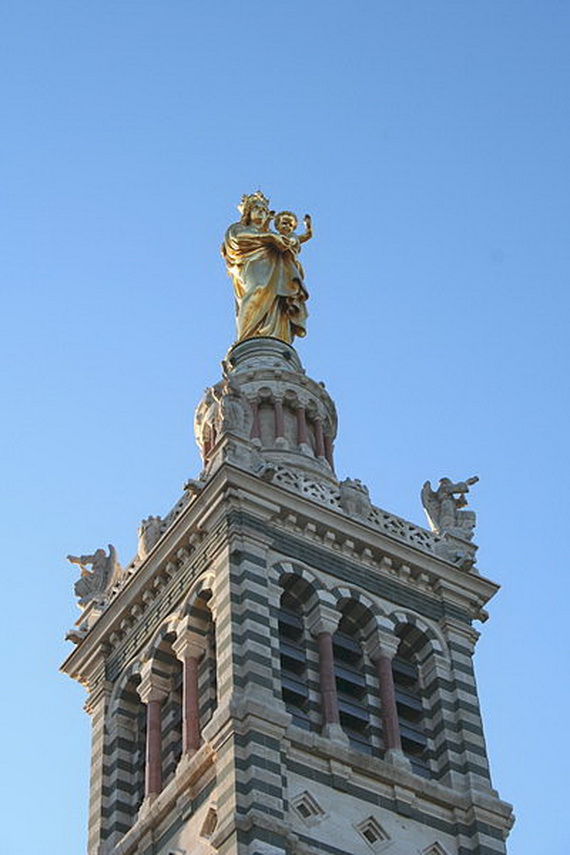 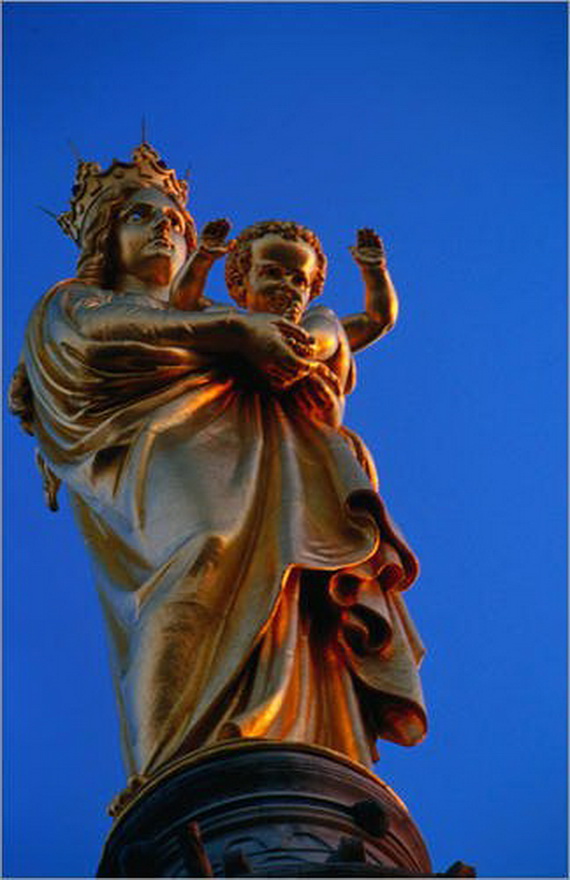 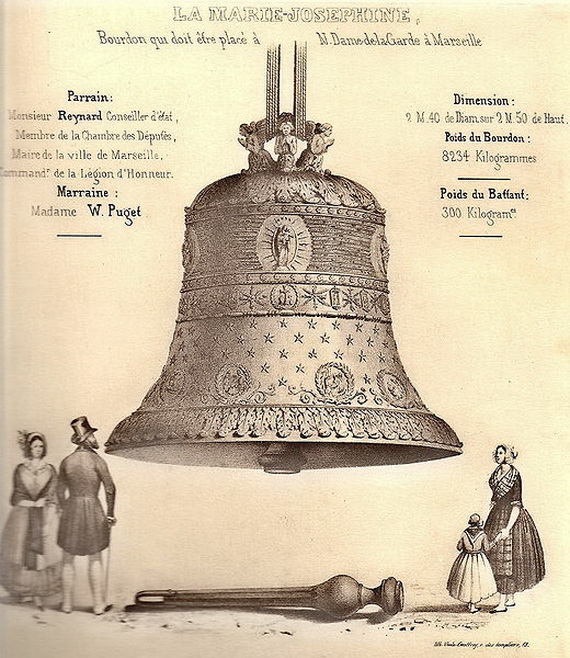