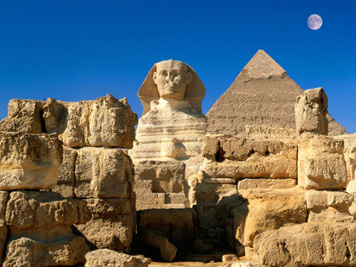 The Great Sphinx of Giza is a figure synonymous with ancient Egyptian culture and remains shrouded in mystery , it is a symbol of kingship in ancient Egypt and it is probably related to solar worship.

The most enigmatic of sculptures, the Great Sphinx of Giza is the largest structure created from a single piece of stone ( limestone )left over in the quarry used to build the Pyramids. With dimensions of 65 feet (20m) high, 260 feet (57m) long, and 20 feet (6m) wide. The sheer size of the Sphinx is colossal standing taller than a six-story building, there are no hidden chambers found inside the Great Sphinx of Giza.
The Great Sphinx has the body of a lion and the face of a man. The Great Sphinx placed before the Second Pyramid (the Pyramid of Khafre) fills the observer with wonder and awe by its gigantic and monumental proportions. Scholars believe it was sculpted by the pharaoh Khafre, whose Pyramid rises directly behind it and whose face may be that represented on the Sphinx, though more recently it has been suggested that the construction was set by Khafra’s half brother, Djedefre, in the image and honor of their father, Khufu  then this would mean the construction took place somewhere around 2494 BC, maybe a little before.

The basic facts about the Great Sphinx of Giza including when it was build, The age of the sphinx is not known, many believe to have been created during the 2700s BC.
The Great Sphinx is known to the Arabs as Abul-hol meaning the father of terror. The name “Sphinx” was given to the statue due to its likeness to a Greek legend of a creature with the head of a woman, the body of a lion, and the wings of a bird.
The Greek word “sphinx” may have derived from the Egyptian shesep-ankh, which translates to ‘living image’.

In Egypt, you will find a number of sphinxes, generally the head of a king with his headdress on that has the body of a lion. In addition, you will find sphinxes that have ram heads and these are related to the god Amun. As the years passed after its construction, the areas around the sphinx were left to the elements,for centuries the sands buried the great ancient monument to the chin., and was badly eroded, it has undergone numerous restorations over the millennia, beginning with one conducted about 1400 B.C. by the pharaoh Tuthmosis IV, who dreamed that the sphinx talked to him, promising him kingship over Egypt if he could clear all of the sand. It is also believed that Ramesses II removed the sand later, and the last large clearance took place around 1925.

The Sphinx’s face was mainly damaged during French occupation around 1800, when Mameluke troops used it for target practice for their field cannons, but its body has been weathered by the elements for thousands of years. The most interesting mysteries of the Sphinx (or at least those producing the most provocative theories) have to do with how it came to be weathered. The outer walls of the body of the Sphinx has been subjected to considerable water damage despite being located on borders the Sahara Desert.

The answer is that it was by millenia of desert winds. because the impressions on the eroded stone of the sphinx are vertical, not horizontal as they would be if the erosion occurred because of sand and wind it was concluded in 1990,that it had been weathered by rainfall, not by wind and sand. If that’s true, its date of construction might be closer to 7000 BC. the 1930s, it was suggested that instead of rainfall, the Sphinx had been worn by seawater and that its origins lay in the ocean.

The Great Sphinx has stirred up the imagination of many, including scholars, tourists, adventurers and poets for centuries The Great Sphinx of Giza was considered by the ancients to be one of the Seven Wonders of the World Formation.

Today, the Great Sphinx of Giza remains a mystery as to why it was created and it may always remain a mystery, unless there are documents that have not yet been found. 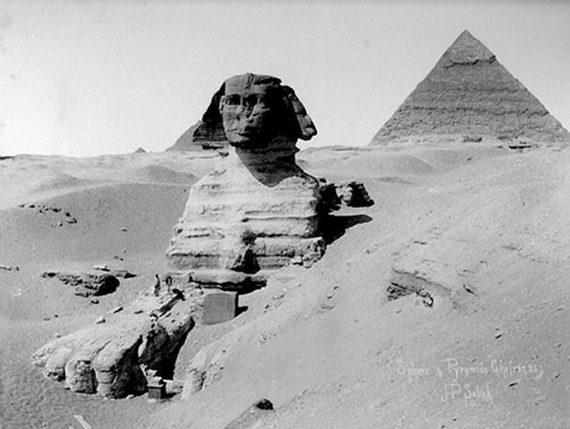 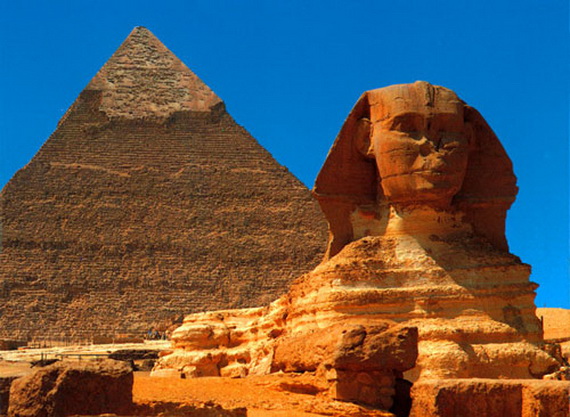 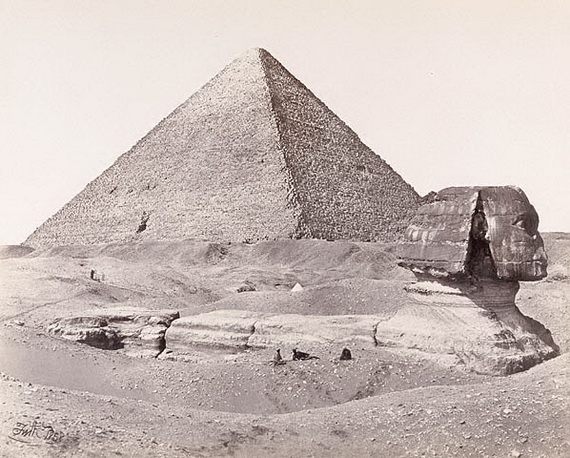 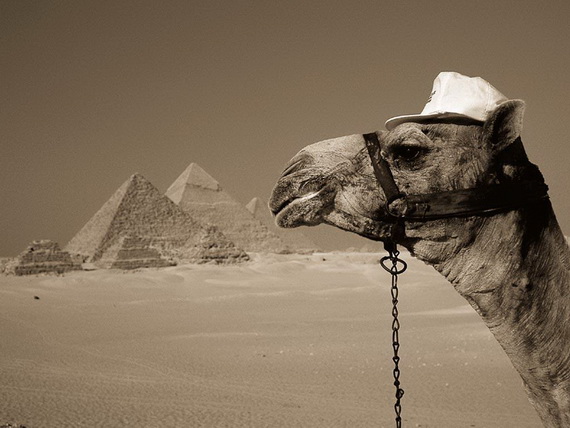 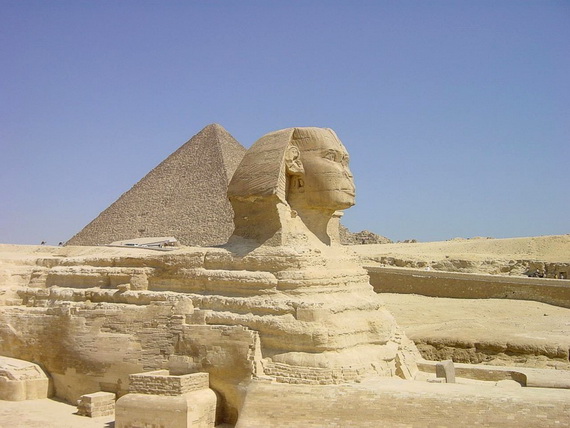 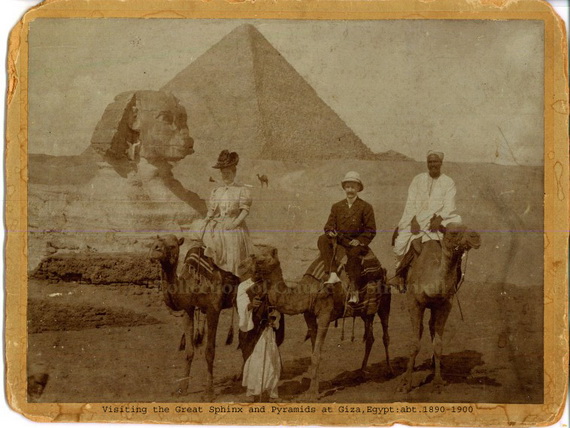 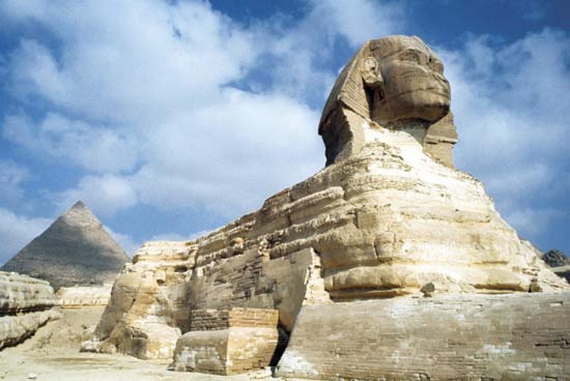 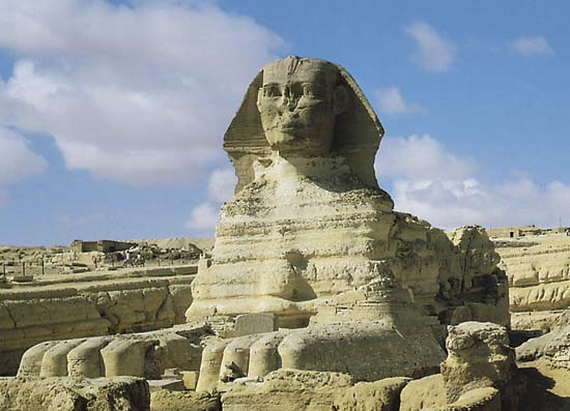 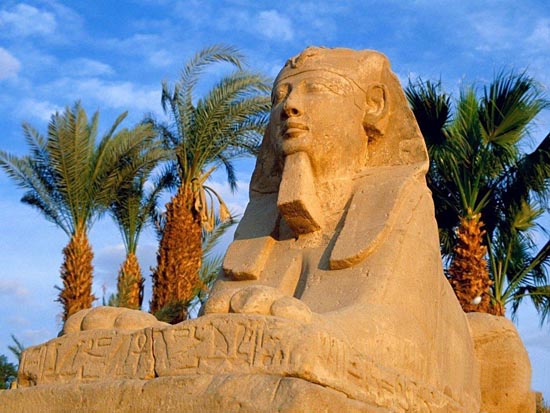 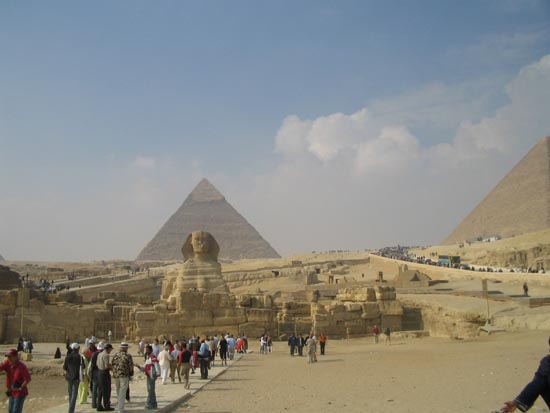 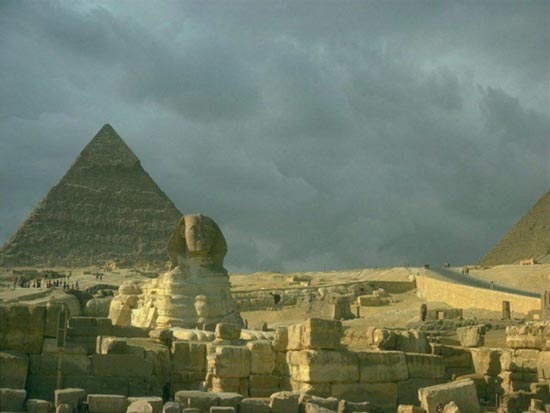 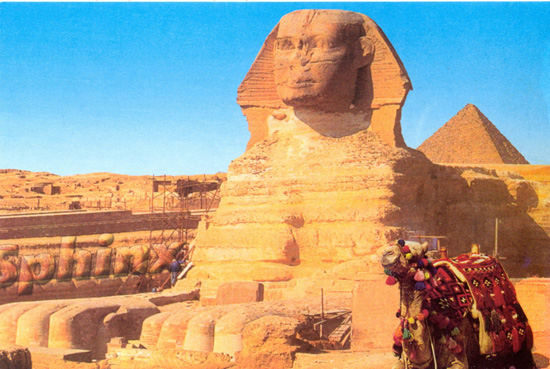 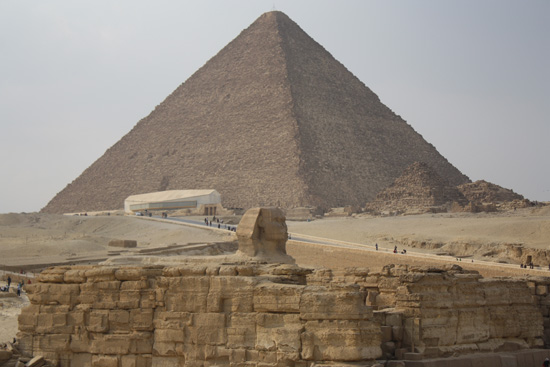 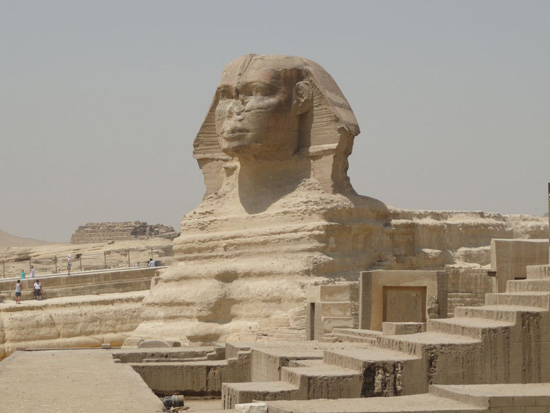 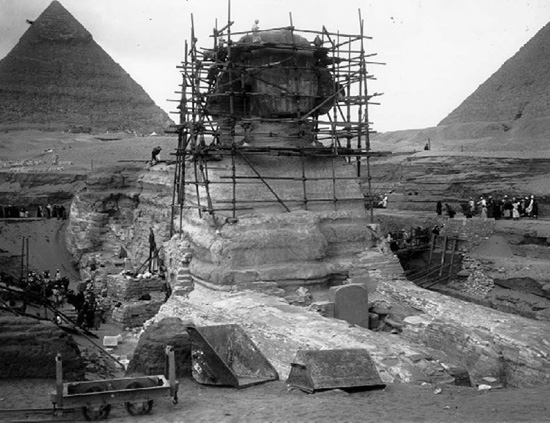 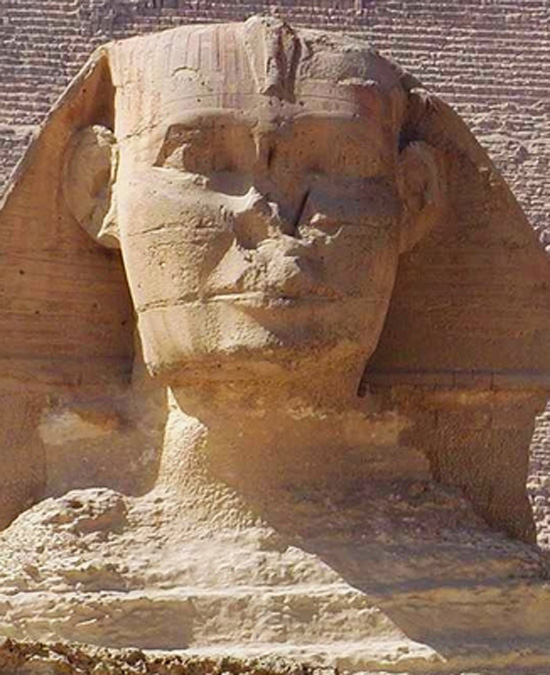 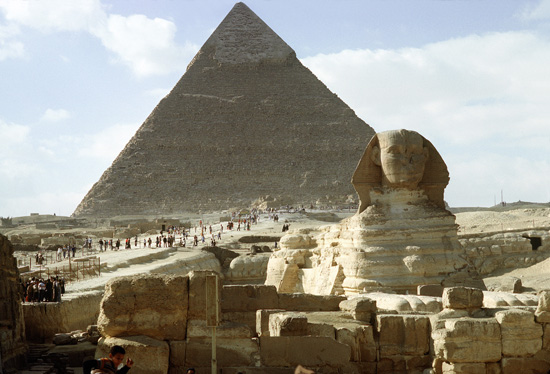 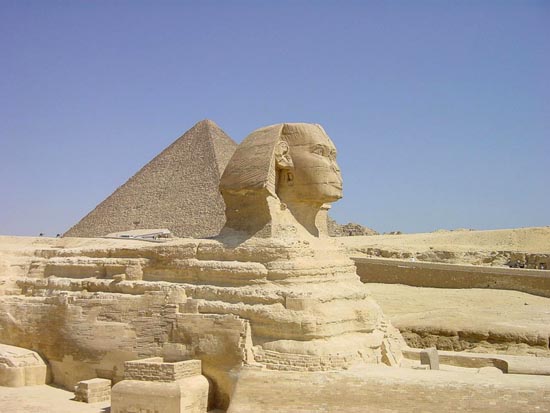 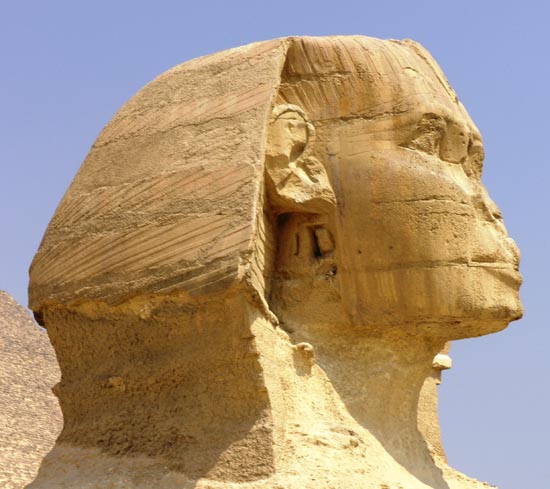 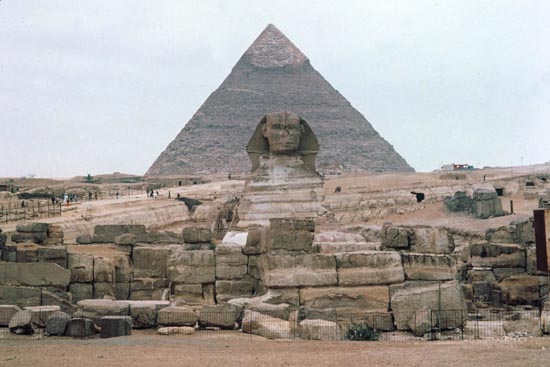 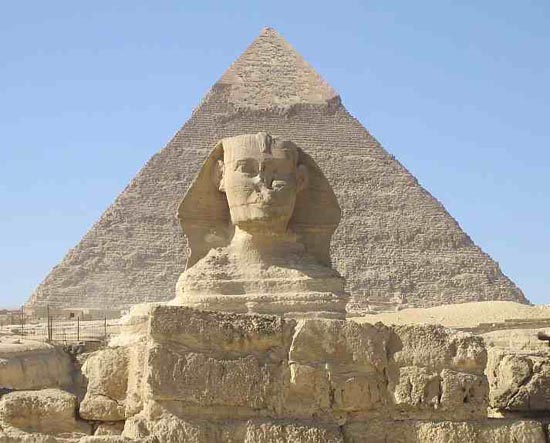 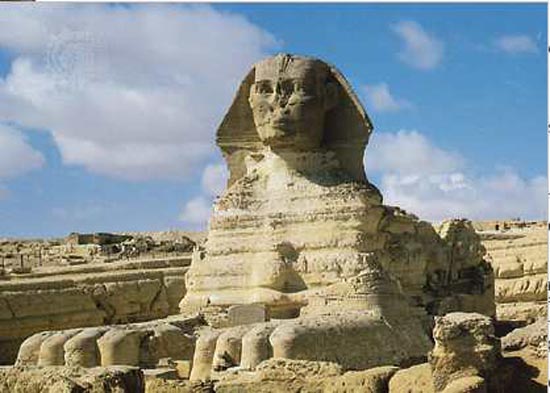 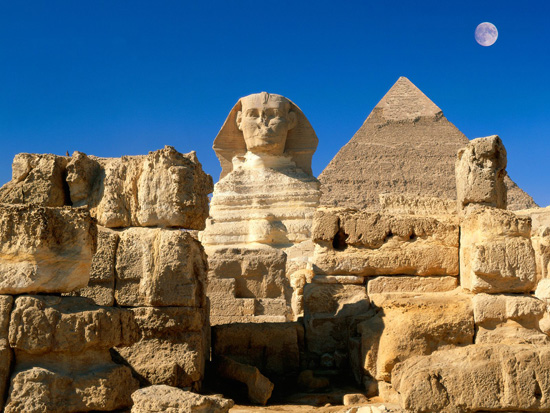