San José the capital and largest city of Costa Rica. Located almost in the very center of this Central American country. It is set in a fertile valley at an altitude of 3,773 feet (1,150 m). San Jose, was first colonized in the 1500s. Founded in 1738, San José is one of the youngest capitals of Latin America by its year of foundation, though it was not named capital until 1823. San José was an agricultural city.

Following the post-war baby boom, urban migration increased completely transforming the capital in a few decades to a political and economic center. More than half of the country’s business and services is there the seat of the government, the focal point of political and economic activity, and the major transportation hub of this Central American nation.

Poás Volcano National Park :
The Volcan Poas National Park is one of the most visited protected areas in the country. It is considered among the largest craters in the world. Poás Volcano is one of the three volcanoes in the continent accessible by road, and one of Costa Rica’s 300 volcanoes.There is volcanic activity like the steam in the area , which is often caused by the interaction of the lava with the water.This mild activity occurred frequently, 39 eruptions have been recorded since 1828.. Apart from its volcanic activity, this national park offers four different habitats,(areas with scarce vegetation, a stunted forest, a cloud forest, and an area of arrayans). 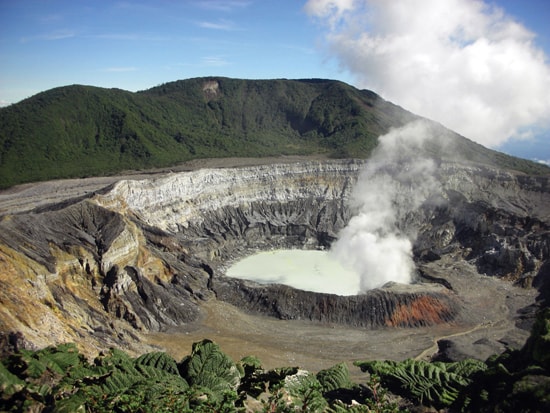 Museo Nacional de Costa Rica (National Museum):
Costa Rica’s most important historical museum. The museum is housed in the old Army headquarters.This museum researches and preserves the cultural and natural heritage and shares its history.
It houses a substational collection of Pre-Colombian History, of ancient cultures from 12,000 B.C. until the arrival of the Spanish.

Fidel Tristan Jade Museum:
Costa Rica’s most famous museum . It is located in a subterranean building underneath the Plaza de la cultura.
Consists of 1600 artifacts original pieces that date from 300 to 1500 A.C, offering the world’s largest collection of American jade with hundreds of pieces on display, many of which is housed in a stunning black glass structure to show off the beautiful translucent quality and colors of the jade. The collection includes Costa Rica’s first coin, the Media Escudo which was minted in 1825,and other numerous archaeological exhibits of gold, ceramics, and stone organized by culture and region.

Teatro Nacional( The National Theater):
An architectural work of art, the National Theatre was constructed in 1897 century by means of a heavy tax on coffee production,as a symbol of European aspirations of the liberal coffee society.

Spirogyra Butterfly Garden:
A small butterfly garden ,and a place where butterflies are studied and preserved. Costa Rica is home to more than 1,200 butterfly species and 12,000 moth species, and more than 30 are represented here, in addition to five hummingbird species.